Flaming Hot Mountain Dew Turned Me Into a Paladin - A Review

I consider myself to be an adventurous drinker. My taste-buds are in an endless pursuit of new and exotic flavor profiles that grow more manic as I grow older. Being quite the aficionado of spice and soda, I heard mention of a certain beverage making its rounds across social media. The concept of making a spicy drink has been around for ages. Ghost pepper vodka, for example, is a beverage enjoyed in certain godless cabals of the Northeast. The unique experience of flaying your taste-buds while pouring capsaicin into the open wounds is a harrowing foray into the world of extreme cocktails.

But that’s not what we’re talking about today. Today we talk about a marriage made in hell, an uncivil union of a 406 billion dollar industry and the Redditor shitposters that revel in it. Today we gather to tie the binds of carbonated soft drinks and gamer memes in unholy matrimony. Speak now and you may forever hold your peace.

I encountered mentions of this abomination on Twitter, in which a number of my followers tweeted images of this screaming hateful red abyss on their feeds as if God could not see their transgressions. Despite the fire and brimstone references used throughout my writing, I don’t consider myself a religious man. I can, however, understand that if there is a God, He’s probably long since abandoned us for pulling shit like this.

As a semi-rational creature, I tried to make sense of why anyone would create this, let alone expect other thinking feeling human beings to go out and purchase this declaration of divine independence. So, being the semi-rational thinking being I am, I did the only thing I could do in light of this forbidden knowledge. 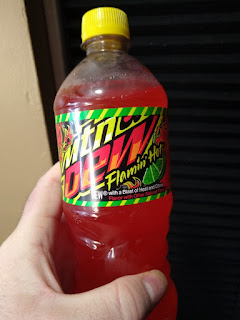 Flaming Hot Mountain Dew is what extraterrestrials would make if they ran a small-batch distillery in Kansas. The unique pungent taste of discount sriracha combined with the sensation of a lime being force squeezed onto the roof of your mouth like some bizarre interrogation method makes this the drink of choice for recently divorced parents in Alpha Centari.

However, like a fine whiskey, the complex taste profile evolves. Further down, the beverage transforms into a bizarre melange of half-chewed stale bubble gum sprinkled with distant hints of cayenne pepper. I would say at this point I stopped subjecting myself to this corporal punishment but I was raised Catholic and, with the $2.29 sticker price staring at me on the side of the bottle, I sojourned forth motivated by avoiding the venal sin of wasting food adjacent products.

It was at this point that I encountered this drink’s final evolution. The fires of the Malebolge licked at the back of my throat as the ripe taste of rubber tire mixed with battery acid. It then doused my palate with kerosene before lighting my mouth ablaze with the lingering umami of burnt match sticks. Still, I ventured forward. Like a paladin at the gates of Hell I pressed forward, sword raised in defiance to the fiends that blocked my path.

It was at the 95 percent empty mark that I no longer felt anything. All that was left was an endless sensation of bargain bin capsaicin washing against the back of my throat like a salt bath. With one final push, I emptied the contents of the bottle and vanquished the liquid demons that stood in front of me. Triumphant, I stood and shot my fists heavenward like I was about to be taken for the Rapture. That was when I felt it.

Prior to this ordeal, I’d had a lunch of five-alarm chili smothered in Tostito’s cheese salsa (I never said I made good choices). The combination of this and the raw violence I’d inflicted upon my taste-buds compounded into an eldritch horror that had now birthed in my guts. As soon as I’d stood, the ancient words that would raise unspeakable terror broke the final seal in my stomach. Sweat poured down my brow. I grimaced.

I don’t remember when it stopped. Hours seemed to have passed in that bathroom but when I finally emerged from that blasphemous pit, I returned a changed entity. I’d stared into the foulest dens of culinary evil and had emerged victorious. All in all, I give Flaming Hot Mountain Dew five out of ten stars. You have to admire when a product delivers on what is promised on the label. I wouldn’t say it’s flaming hot, but it definitely invokes the experience of devouring a bag of flaming hot Cheetos drunk at 3 am. 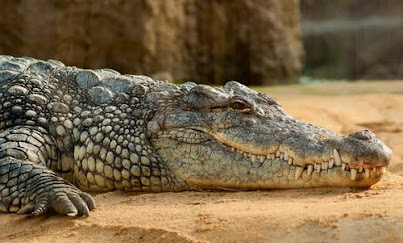 So, this is the beginning of the road. For years I danced with the idea of becoming a professional writer and now, the time has come.  As of this writing, I've completed my first manuscript of my debut novel and am now awaiting response from my beta readers.  It's strange to see years of work now brought to life, congealed into a hundred plus pages.  So with that, thanks to those that have dedicated their time and energy to make this book a reality.      It begins.
Read more